Women’s Liberation!: Feminist Writings That Inspired a Revo-lution & Still Can 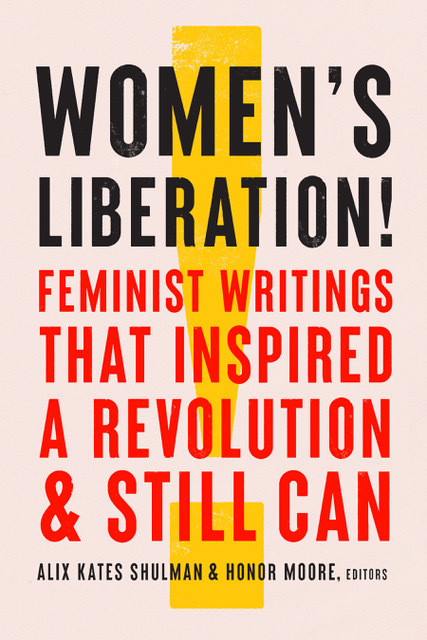 The Library of America's anthology of Women's Liberation writings, from Betty Friedan's 1963 The Feminine Mystique to Susan Faludi's 1991 Backlash.

Arranged chronologically, these 90 pieces portray feminism's second wave as it expanded from a campaign for women's civil rights into a diverse and revolutionary movement for freedom and social justice that challenged many aspects of everyday life long accepted as fixed. Reimagining work, birth control and abortion, childcare and housework, gender, class, and race, art and literature, sexuality and identity, rape and domestic violence, sexual harassment, pornography, and more, the women's liberation movement upended society's presumptions.

Fifty years on, in the age of #MeToo and Black Lives Matter, this visionary and radical collection of works—many long out-of-print and hard to find—is as relevant and urgently needed as ever, ready to inspire a new generation of feminists. With an introduction and headnotes by Shulman and Moore that provide historical and personal context, the anthology reveals the crucial role of Black feminists and other women of color in a decades long mass movement that not only brought about fundamental changes in American life—changes too often taken for granted today—but envisioned a thoroughgoing revolution in society and consciousness still to be achieved.

Available in print and ebook editions

Praise for Women's Liberation!: Feminist Writings That Inspired a Revolution & Still Can

Novelist Shulman (Memoirs of an Ex-Prom Queen) and Moore (Our Revolution) highlight the diversity and radicalism of second-wave feminism in this sweeping anthology. Arranged chronologically from Betty Friedan's The Feminist Critique (1963) to Susan Faludi's  (1991), the selections track the evolution of the movement from ending legal discrimination against women, through exposing "deep-rooted attitudes of sexism and misogyny," to defending against "escalating right-wing attacks" and addressing internal divisions over pornography, sexuality, race, and class. Milestone works such as Kate Millet's Sexual Politics and Susan Brownmiller's Against Our Will get their due, but the anthology's greatest strengh is its elevation of lesser-known activists and groups. Organizers of the Combahee River Collective analyzing "interlocking" systems of oppression in "A Black Feminist Statement"; Lin Farley, a human resource director at Cornell University in the 1970s, offers one of the first guides to fighting sexual harassment in the workplace; and Z. Budapest, founder of Diana Wicca, describes resistance to the "Goddess religion" within the pagan community and the feminist movement. Each excerpt is succinctly introduced and contextualized, and controversies (such as the "sex wars" of the 1970s and '80s) are highlighted rather than ignored. The result is both a comprehensive introduction to the movement and a persuasive defense of its revolutionary nature." —Publishers Weekly

Click to order Women’s Liberation!: Feminist Writings That Inspired a Revolution & Still Can