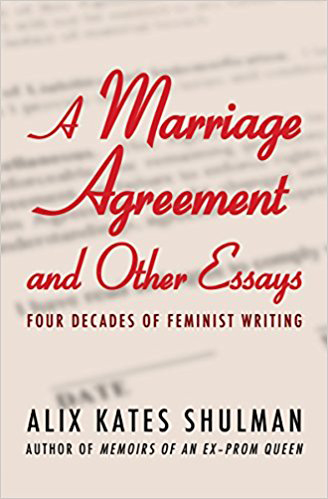 Collected here for the first time, are fifteen of Alix's most controversial essays from the past four decades. Grouped under the headings Marriage, Sex, Writing, and Late Life, they range from the notorious "A Marriage Agreement" to "The War in the Back Seat," "Organs and Orgasms," "The Taint of Feminist Fiction," "Thoughts at Seventy," and more.

The collection leads off with Shulman's controversial "A Marriage Agreement," proposing that partners share childcare and housework equally. It was so explosive in 1969 that it was reprinted as a Life Magazine cover story and attacked by Norman Mailer and Russell Baker, and again in a 2006 book by Caitlin Flanagan. This essay is followed by "A Marriage Disagreement," Shulman's own exposé and reevaluation of her Marriage Agreement.

MARRIAGE AND MEN
A Marriage Agreement
A Marriage Disagreement
Between the Sexes:Breaking the Truce

SEX
The War in the Back Seat
Organs and Orgasms
Sex and Power: Sexual Bases of Radical Feminism

LATE LIFE
Thoughts at Seventy
Summer Jew
Help Wanted: Other Woman
Caring for an Ill Spouse and Other Caregivers
The Kenning

Praise for A MARRIAGE AGREEMENT AND OTHER ESSAYS:

“Stirring and important, courageous and insightful, Alix Kates Shulman's remarkable essays now collected in one volume are a great gift to us all.”
—Blanche Weisen Cook

“Should be required reading for anyone who takes for granted the economic, educational and social gains women have made during the past forty years. Shulman reminds us of a time—only yesterday—when it was routine for women to be told they their salaries should be lower than the salaries of men because a man has to "support a family;" when young unmarried women waited anxiously for their periods because the lack of reliable contraceptives meant that unwanted pregnancy was an ominipresent risk; when some of those women died from unsafe, illegal abortions; when no one, male or female, could have imagined women's votes being considered an important, independent force in politics. The revival of outdated, demeaning stereotypes of women during the 2012 presidential campaign makes these essays as timely as they were several decades ago and serves as a reminder that social progress can never be taken for granted.”
—Susan Jacoby

Click to order A Marriage Agreement and Other Essays